DPRK President Kim Il Sung (1912-94) is said to have met thousands of foreigners, but comparatively few Americans. Those Americans include:

After DPRK independence in September 1948:

The above DPRK video includes Kim meeting Rev. Billy Graham, Selig Harrison and former President Jimmy Carter. Also, the international delegation I accompanied in April 1994 is shown around the 4:30 mark; I’m in the back row, third from the left, of the group shot (just like the header photo at top).

Before DPRK independence in September 1948 (thanks to Koryo Tours for this info):

Does not include the names of U.S. citizens who were likely part of CNN’s crews in its 1992 and 1994 visits in which they met Kim Il Sung, nor the names of any Communist Party USA (AKFIC) members who may have met Kim (AKFIC at least got a written response to interview questions); CPUSA head Gus Hall once received a box of presents from Kim. Black Panther leader Eldridge Cleaver visited North Korea twice in 1969-70, but may not have met Kim himself despite his subsequent praise of the regime. For names of several Korean-Americans who met Kim, likely among at least dozens, please confer Dr. Myers’ comments below.♦

I was asked by a member of my graduate institution’s board of trustees for my observations on President Trump’s recent offer of coronavirus assistance to North Korea. Here’s an edited version of how I responded:

“Trump’s letter to Kim Jong Un about COVID-19 assistance was a good gesture and it keeps their personal relationship going, but should not be taken literally. Trump’s purpose is to keep the North Korean issue out of the limelight until past November, and in part, this was an easy way to do that. North Korea is very selective about medical aid (as opposed to food aid) because it doesn’t want outside health experts to see the true extent of their problem. And any U.S. offer of medical aid would likely require waiving of specific sanctions by the UN; the sanctions against North Korea are very pervasive, making it excruciatingly difficult for even NGOs like Doctors Without Borders to get wanted equipment and medicine in. And the President would not like the appearance of some sanctions being exempt because it would look like the U.S. is loosening up its pressure. So it’s a Catch-22: The U.S. is willing to help North Korea with the virus, but to actually provide meaningful help, North Korea would, in effect, first have to fully denuclearize and only then would sanctions be lifted, which the DPRK will not do. And there is no possibility of an interim deal with Trump — just like in real estate, where the sale of a property is a one-shot deal, not an ongoing business relationship. And yet the North is only willing to do incremental deals.”♦

See “U.N. Calls for Rolling Back Sanctions to Battle Pandemic” for the UN Secretary General’s perspective. And also this op-ed: “How Trump Can Change Sanctions to Allow Anti-Coronavirus Aid to North Korea.“ 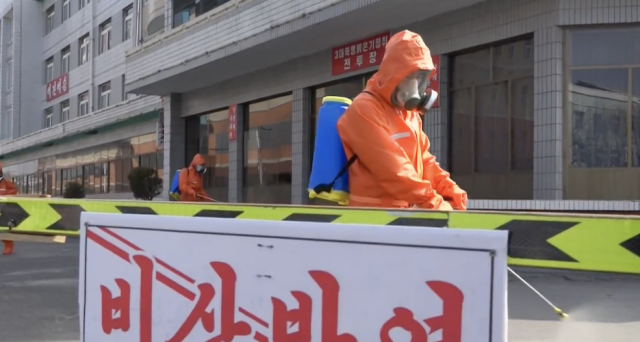 I was quoted yesterday by Radio Free Asia’s Korean service about the DPRK Foreign Ministry statement issued March 19 that it is a land free of coronavirus cases.

Here is the original Korean:

And below is a machine translation into English:

I provide my full email comments below. Many thanks to writer Albert Hong:

“While I don’t believe North Korea has zero cases of COVID-19, I do believe its political system of social control and existing capabilities of its medical system give it the ability to keep the actual number of cases under control and to monitor them well. As to why the DPRK made this announcement, it’s probably to say something that praises their regime rather than remaining silent at this time.

“Moreover, on management of the coronavirus threat, they are showcasing China’s praise of the DPRK’s handling of this situation, as well as pointing out the inability of nations like the U.S. and European countries to quickly and properly deal with this pandemic. It’s a way of saying Asian authoritarian regimes know how to successfully manage public health emergencies.”♦

Arirang News has a new interview program at 8 am weekdays hosted by Oh Sooyoung called “Arirang News Global Insight.” Today, I was interviewed on North Korea’s second rocket test this year along with Dr. Graham Ong-Webb, Research Fellow, S. Rajaratnam School of International Studies, Nanyang Technological University in Singapore. We discussed what North Korea may be trying to achieve in the eyes of the world by continuing to conduct artillery strike drills involving multiple rocket launchers:

I provided my comments today to Radio Free Asia’s Korean service on what likely would be leading Democratic presidential candidate Joe Biden’s policy toward North and South Korea:

And here are my full comments as provided by email. Many thanks to Albert Hong:

“The Democratic Party has not had a good track record with North Korea since the Obama administration, unlike under the Clinton administration that negotiated the Agreed Framework in 1994. At best, under Obama, it had been one of benign neglect, and under President Trump, Democrats seem to have tried to sabotage his efforts in 2018-19 to engage North Korea. Nancy Pelosi apparently is extremely distrustful of North Korea (as she conveyed to the Speaker of the ROK National Assembly) and appeared to have deliberately scheduled Michael Cohen’s long-awaited House testimony while Trump was in Hanoi in late February 2019 while he was meeting Kim Jong Un – just to unnerve and distract Trump. In a sense, Pelosi helped contribute to the failure of the Hanoi summit.

“Unfortunately, I do not see a Biden administration changing the current policy of comprehensive sanctions and probably it would ramp joint military exercises back to normal (see Biden’s declared policy on North Korea here). If Trump had laid a foundation with Kim that led to an interim nuclear agreement, then if elected, Biden could build on that; but without any substantive agreement, Biden will likely not make any moves to improve relations with North Korea. However, Biden would not attempt to withdraw any U.S. troops from South Korea or demand excessive payment by the ROK to maintain American forces, whereas if reelected, Trump will likely draw down U.S. Forces Korea to about 4,000-5,000 and explain this drawdown is because the ROK refused to pay its fair share. This will have a very damaging impact to regional security in Northeast Asia.

“In contrast, Bernie Sanders has said he would be willing to meet with Kim Jong Un, but Sanders may no longer have a realistic path to the nomination given events in the last few days.”♦

Arirang News in Seoul has introduced a new interview program at 8 am weekdays hosted by Oh Sooyoung called “Arirang News Global Insight.” Today I was interviewed on North Korea’s first rocket test for 2020 along with Dr. Ramon Pacheco-Pardo of King’s College, London. It became a wide-ranging discussion, including on how the DPRK may factor into the U.S. presidential election:

Also, a segment based on the above interview was broadcast later in the day:

I am again quoted in the February 16, 2020 China Newsweek, this time on the appointment of Ri Son-Gwon as the new DPRK Foreign Minister:

Many thanks again to writer Ran Cao for his detailed report. Here are my full comments as submitted by email on Jan. 31:

“Ri Son-gwon’s new role as FM in itself has little impact on U.S.-DPRK relations because he is unlikely to ever get personally involved in negotiations. Rather Madam Choe and her people will continue to manage the process, because Ri’s predecessor also did not get involved in this special aspect of DPRK foreign policy. Life-long Foreign Ministry professionals are important for North Korea because they are the only people trained to deal with their international counterparts in the manner of government-to-government relations. Ri’s appointment, as a military man and former righthand to Kim Yong Chol, could be a signal that North Korea intends to safeguard its nuclear program and not negotiate it away unless the U.S. were to remove its sanctions upon the North — a most unlikely scenario. Figures like Ri wear multiple hats: most have military ranks and occasionally wear uniforms, but they are primarily party people, since that remains Kim Jong Un’s base of power; the military and government are secondary to the party to him.

“We need to see prospects for U.S.-DPRK negotiations in 2020 with the new perspective of Trump’s assassination of Iran’s General Suleimani and offer of a non-starter peace deal to the Palestinians in January (seen as a plan that seeks their capitulation). Kim Jong Un, perhaps rightly so, may have already concluded that Trump will never make a deal where he appears to be weak or cave in, and that he is unpredictable. Trump also does one-shot deals, not interim deals; that’s his character. Therefore, despite the fact that Trump will survive impeachment and is likely to be reelected, the personal relationship with Kim, which is all that survives right now, is not a sufficient basis to move forward. Kim surely is saying to his generals that the only way the U.S. will respect North Korea is to retain a nuclear capability that will prevent unilateral action by the U.S.; it is the “great equalizer” for an otherwise weak country whose dependence on China is only increasing. After reelection, we will see what Trump will do, but right now, he seems capable only of either breaking deals or of imposing deals or conditions on those who are too weak to resist or object.”

Also, on January 21, I was one of 12 North Korean specialists surveyed by Radio Free Asia’s Korean Service on likely North Korean behavior towards the U.S. and South Korea in 2020. These were the 12 interviewed, in my case by Dukin Han:

Although I was not quoted in the posted article above, some of my comments were later included in a RFA Korean radio broadcast about the survey which was not posted online. Here are my full comments as submitted by email in mid-January (pre-coronavirus):

“The fact that President Trump conveyed birthday greetings, through the visiting ROK National Security Advisor, to Kim Jong Un in early January indicates that the core relationship still exists, which both sides don’t wish to break. U.S.-DPRK negotiations cannot begin until Trump’s impeachment trial is over. But after acquittal, the President would be somewhat more free to pursue improved relations with North Korea while the Democratic primaries continue from February through June.

“At this point, Kim has refrained from any new provocations, perhaps at China’s restraint, although that can’t last forever. In any case, I don’t think North Korea would be ready to alter its position at all at least until around the time it celebrates Kim Il Sung’s birthday on April 15, at the earliest. However, the U.S. has not lifted any sanctions (although enforcement tends to be spotty), and even introduced two new sanctions in mid-January. The only way North Korea can hold out is to continue to receive major economic support from China while finding ways to circumvent sanctions and seeking new sources of income.

“However, overall, North Korea believes it is urgent to improve relations with the U.S. in order to counterbalance enormous Chinese pressure to engage more closely with China, which could lead to progressive loss of DPRK sovereignty in 2020 and beyond, as China, in my view, would ideally prefer to integrate the DPRK economy into its own and reduce the North’s ability to conduct foreign policy without Chinese approval.”♦

A Blog of Unification Theological Seminary

The latest news on WordPress.com and the WordPress community.